Until two months ago I had never heard of Queen Anacaona, the golden flower. At first I thought she was a mythical character resurrected from legends long lost in the rain forests of the Caribbean. Very rapidly, however, I learned she was not myth, but a heroic queen of the Taino people, born in what today is known as Haiti, and the events of her life have been recorded as historical fact.

That she and her people were massacred by the invading Spanish is also fact. Some of the queen’s biographical information is written in French and some in Spanish, but there is much reliable information on the Internet written in English.

Briefly, according to Wikipedia (http://en.wikipedia.org/wiki/Anacaona), Anacaona (1464 – c. 1504), also called the Golden Flower, was a Taíno cacique (chief), sister of Bohechío and wife of Caonabo, chief of a nearby territory, two of the five highest caciques who ruled the island of Hispaniola when the Spaniards settled there in 1492. She was celebrated as a composer of ballads and narrative poems, called areítos. 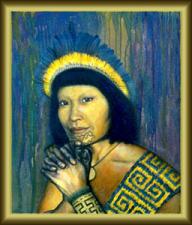 The Golden Flower of the Taino People

Anacaona became chief of Jaragua after her brother’s death. Her husband Caonabo, suspected of having organized the attack on La Navidad (Spanish settlement on northern Haiti), was captured and shipped to Spain; he died in a shipwreck during the journey.

During a feast organized by eight regional chieftains (caciques) to honor Anacaona, the Golden Flower, Spanish Governor Nicolás de Ovando ordered the meeting house set on fire. He arrested Anacaona and her Taíno noblemen, all were accused of conspiracy and were executed. While others were shot, Anacaona was executed by hanging. She was thirty-nine years old.

According to the site Caribbean Amerindian Centrelink, (http://www.centrelink.org/anacaonaresources.htm)

“The historical Anacaona is a figure that has attained almost legendary status in narratives of anti-colonial resistance in Hispaniola during the early years of Spanish conquest. The story of Anacaona is one of both courage and tragedy, a story that lends itself to considerable reworking in the historical imagination. In reading various online resources, some of which provide references to published works, the reader must keep in mind that everything we know about Anacaona comes to us not from indigenous sources, or from dispassionate scholarly observers on the ground, rather we receive what we know from Spanish colonial chronicles, which means that, at best, our knowledge will always be second hand, incomplete, and a product of colonialism itself.”

One thought on “Queen Anacaona, the Golden Flower”